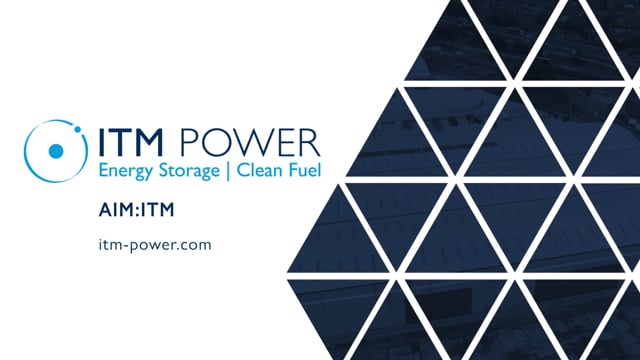 ITM Power (AIM: ITM) manufactures integrated hydrogen energy solutions for grid balancing, energy storage and the production of renewable hydrogen for transport, renewable heat and chemicals. The Group operates from the world’s largest electrolyser factory in Sheffield with a capacity of 1GW (1,000MW) per annum. In October 2019, the Company announced the completion of a £58.8 million fundraising, including an investment by Linde of £38 million, together with the formation of a joint venture with Linde to focus on delivering renewable hydrogen to large-scale industrial projects worldwide. The Group subsequently signed a deal to deploy a 10MW electrolyser at Shell’s Rhineland refinery.

“…since the 2015 Paris climate agreement, “low carbon hydrogen”, produced either without fossil fuels or by storing and capturing the emissions generated, is firmly back on the agenda. Governments adopting net zero targets are desperately seeking ways to slash emissions from highly polluting sectors including heating, heavy industries like steel and long distance transport, where other options either don’t yet exist or are also in their infancy.

Last year, the EU and at least 15 other countries published hydrogen plans often backed by subsidies to help lower production costs, according to industry lobby group the Hydrogen Council. At least $300bn is expected, says the council, to be invested globally over the next decade by the public and private sectors, with some in the industry projecting that — if successful — hydrogen could one day help meet almost a fifth of global energy demand. But, so far only $80bn has been committed.”

Motley Fool (Apr 2021)
“As someone who believes clean energy is the future, I’d buy ITM Power (LSE: ITM) shares today. The stock has fallen from its highs and closed at 492.8p on Tuesday. But it was 717p in January, although it was only 136.73p a year ago. Yet I reckon now may be a good entry point. Here’s why…”

interactive investor (Mar 2021):
“A new craze for clean technology and hydrogen stocks has already generated significant stock market returns for many investors in ITM Power (LSE:ITM). Now, chief executive Graham Cooley explains the science behind the technology, the future of oil companies such as Royal Dutch Shell (LSE:RDSB) and BP (LSE:BP.) and shares his vision of global energy provision in the 21st century.”

Barclays (March 2021)
“Hydrogen is a climate megatrend at the forefront of the decarbonisation strategy for many industries and government. ‘Green hydrogen’, the cleanest method of production, is attracting unprecedented investment and policy support… As the industry scales up, costs have the potential to halve by 2025, enabling green hydrogen to become cost-competitive with ‘grey’ hydrogen, the dominant but highly polluting alternative. While electrolysis technology is not new, as an industry it is nascent, and projects currently depend on government support to move forward.”

JP Morgan Cazenove (Feb 2021)
“We expect ITM to benefit from significant growth in global green hydrogen demand and thus hydrogen electrolyser demand. The group is increasing its manufacturing with the recently commissioned Bessemer Park facility, which has 1GW of manufacturing capacity. This also will help the group reduce costs and increase profitability.”