During April, HVPE committed a total of $190 million to two HarbourVest-managed funds. This included a new commitment of $75 million to a global multi-strategy fund of funds and an additional commitment of $115 million to an US-focused venture fund of funds. At 30 April 2022, HVPE’s Investment Pipeline (unfunded commitments) totalled $2.8 billion. The new commitments, alongside foreign exchange rate movements, and minus capital funded, contributed to a net increase of $169 million from the prior month.

During April, HVPE invested $20 million into HarbourVest funds (compared to $75 million in March 2022). The largest individual investment during the month was made to a 2021 vintage US-focused venture fund of funds.

At 30 April 2022, HVPE’s estimated NAV per share was $47.54 (£37.81), compared to the 31 March 2022 estimate of $48.08 (£36.59). This represents a 1.1% decrease in US dollar terms over the previous month. It is important to note that the 30 April 2022 NAV per share is now based on 31 December 2021 valuations or more recent (see breakdown below). Valuation gains from the receipt of the final December 2021 valuations were more than offset by public market declines and negative FX movements, leading to the overall small decrease in the estimated NAV per share over the month.

The valuation breakdown of the HVPE portfolio as reported here is as follows: 10% actual 30 April 2022 (representing the public companies in the portfolio); 90% actual 31 December 2021. Consistent with previous estimated NAV reports, valuations are also adjusted for foreign exchange movements, cashflows, and any known material events to 30 April 2022.

HVPE received distributions of $1 million from HarbourVest funds during April 2022 (compared to $112 million in March 2022). The largest source of proceeds came from a secondary co-investment transaction. During April, there were a total of 15 M&A transactions and IPOs across HVPE’s underlying portfolio compared to March’s 23, and a last 12-month average of 38.

At 30 April 2022, HVPE had the full $700 million available on its credit facility. Borrowing at the HarbourVest fund level amounted to $512 million, an increase of $23 million from the previous month. HVPE’s cash and cash equivalents ($295 million) and available credit ($700 million) totalled $995 million.

Additional detail about HVPE’s NAV and investment diversification can be found on HVPE’s website, in the Monthly Update for 30 April 2022. 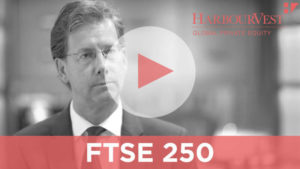