JLEN, the listed environmental infrastructure fund, is pleased to announce that it has reached an agreement for the sale of its two French onshore wind farms, Parc Éolien Le Placis Vert and Energie Eolienne de Plouguernevel to Volta Developpement, for a total consideration of €5.9 million. This is in-line with the valuation as at 30 September 2021 although it represents a 25% uplift to the value of the assets at 30 June 2021, the last valuation prior to receipt of firm bids. Completion of the disposal is subject only to a customary condition precedent.

The wind farms have been operational since 2016 and are located in the Côtes-d’Armor region of Brittany in north-western France. They were acquired by JLEN in 2016 from Energiequelle, in an operational state and have a combined generating capacity of 8MW. Both projects benefit from a 15-year Feed-in-Tariff.

This is the Company’s first divestment and while JLEN’s strategy is to hold its assets over the long-term, it will consider opportunities to generate value for shareholders through the divestment of certain assets as they arise. These opportunities will be evaluated against the Company’s strategy of diversification and the ability of the asset to generate stable financial returns.

The proceeds of the sale will be used to repay amounts outstanding under its revolving credit facility which is available to meet existing commitments and fund further pipeline projects.

“We are pleased to have reached an agreement to sell JLEN’s French wind assets at an uplift to the valuation prior to the receipt of firm bids. While the scale of the valuation uplift on disposal cannot necessarily be assumed to apply across the entire portfolio, we believe that it demonstrates our conservative approach to valuations. The Board remains open to further selective divestments in the future to recycle capital and to demonstrate the underlying value of JLEN’s portfolio of environmental infrastructure assets.”

Below is an interview with the investment team, Chris Tanner & Chris Holmes who talk us through the highlights from the period 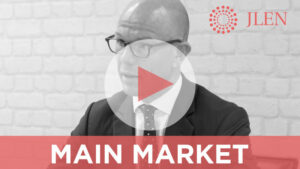