RECORD REVENUE FOR THE FIRST QUARTER OF 2021

“Wheaton’s first quarter results illustrate the strength and growth profile of our diversified, high-quality portfolio with record revenue achieved and over $230 million in operating cash flow generated. As a result of these strong results, we have increased our dividend for the third quarter in a row and now have net cash on the balance sheet, which we will look to deploy to further grow our sector-leading portfolio,” said Randy Smallwood, President and Chief Executive Officer of Wheaton Precious Metals. “We are excited to report our first production of cobalt from the Voisey’s Bay mine in Canada and look forward to having many more years of what we believe is the most environmentally friendly, socially responsible cobalt production in the world. In addition, in the first quarter, we added a new precious metals stream on a top-tier copper development project, Santo Domingo, which should provide additional growth. Our corporate development team remains exceptionally busy evaluating a host of new opportunities, and as always, Wheaton is focused on ensuring our growth is both accretive and sustainable for all of our stakeholders.” 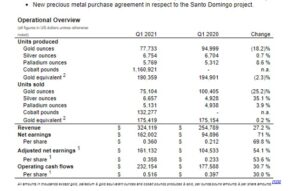 Salobo: In the first quarter of 2021, Salobo produced 46,600 ounces of attributable gold, a decrease of approximately 25% relative to the first quarter of 2020 due to lower throughput. According to Vale S.A.’s (“Vale”) First Quarter 2021 Production and Sales Report, throughput at Salobo was impacted due to changes in maintenance routines which restricted mine movement, with further impacts on feed grade for the quarter. As per Vale’s First Quarter 2021 Performance Report, physical completion of the Salobo III mine expansion was 73% at the end of the first quarter and is on track for start-up in the first half of 2022.

San Dimas: In the first quarter of 2021, San Dimas produced 10,500 ounces of attributable gold, a decrease of approximately 7% relative to the first quarter of 2020 due primarily to lower grades. As per First Majestic’s First Quarter 2021 Production Report, increased ore development activities resulted in lower average ore grades processed in the plant.

Constancia: In the first quarter of 2021, Constancia produced 0.4 million ounces of attributable silver and 2,500 ounces of attributable gold, a decrease of approximately 12% and 33%, respectively, relative to the first quarter of 2020, with the reduction in gold production being primarily due to inclusion of 2,005 ounces received in the first quarter of 2020 as a delay payment relative to Pampacancha. Hudbay Minerals Inc. (“Hudbay”) announced on April 7, 2021, that the final land user agreement for Pampacancha has been completed and Hudbay now has full access to the site and has begun pit development activities. As per Hudbay’s MD&A for the year ended December 31, 2020, Hudbay no longer expects to mine four million tonnes of ore from the Pampacancha deposit by June 30, 2021, and should they fail to meet this milestone, they will be required to deliver an additional 8,020 ounces of gold to the Company in four equal quarterly installments, commencing September 30, 2021. Hudbay and the Company are currently in discussions about, among other things, alternatives to defer the additional gold deliveries over the Pampacancha mine life.

Rosemont: Hudbay announced on March 29, 2021, the intersection of high-grade copper sulphide and oxide mineralization at shallow depth on its wholly-owned patented mining claims located within seven kilometers of its Rosemont copper project in Arizona. As a result of the discovery, Hudbay has initiated a second phase of exploration drilling in 2021 with a 70,000 foot follow-up drill program and has doubled the number of drill rigs operating at site to six. The discovery is included in Wheaton’s area of interest under the PMPA.

Produced But Not Yet Delivered[3]

As at March 31, 2021, payable ounces and pounds attributable to the Company produced but not yet delivered amounted to:

Detailed mine-by-mine production and sales figures can be found in the Appendix to this press release and in Wheaton’s consolidated MD&A in the ‘Results of Operations and Operational Review’ section.

Santo Domingo Mine: On March 25, 2021, the Company announced that it had entered into a PMPA with Capstone in respect to the Santo Domingo project located in the Atacama Region, Chile. The Company will purchase 100% of the payable gold production until 285,000 ounces have been delivered, thereafter dropping to 67% of payable gold production for the life of the mine. The Company will pay Capstone a total upfront cash consideration of $290 million, $30 million of which was paid on April 21, 2021, and the remainder of which is payable during construction of the Santo Domingo project, subject to customary conditions being satisfied, including Capstone attaining sufficient financing to cover total expected capital expenditures. In addition, Wheaton will make ongoing payments for gold ounces delivered equal to 18% of the spot gold price until the market value of gold delivered to the Company, net of the per ounce cash payment, exceeds the initial upfront cash deposit, and 22% of the spot gold price thereafter.

In the second quarter of 2020, Wheaton announced the launch of a $5 million Community Support and Response Fund (the “CSR Fund”) to support global efforts to combat the COVID-19 pandemic and its impacts on our communities. The CSR Fund is designed to meet the immediate needs of the communities in which Wheaton and its mining partners operate. This fund is incremental to Wheaton’s already active Community Investment Program that currently provides support to over 50 programs in multiple communities around the world. As of March 31, 2021, the Company has made donations totalling approximately $3 million with the CSR Fund.