“I am pleased to report on another strong financial year for Bushveld Minerals as we continue steadfastly executing on a strategy, we outlined in 2014, to build one of the world’s largest low-cost and vertically-integrated primary vanadium platforms.

“Following the completion of the acquisition of a 74% interest of Vametco, over a two year 2017-2018 period, I am pleased to see this flagship asset continue to shine. Production grew and costs came in below our guidance estimates. Despite notably lower vanadium prices compared with a year earlier, we were able to report a solid Group EBITDA of US$32.6 million. After tax profits of US$69.2 million were helped by a one-off gain on the acquisition of our second processing facility, Vanchem, which closed near the end of the year, after it was valued higher than our eventual purchase price.

“The acquisition of Vanchem is another significant milestone for the Company, adding another brownfield primary processing plant to complement Vametco. With a 3-kiln configuration, and a product suite of vanadium pentoxide, vanadium chemicals, vanadium trioxide and ferrovanadium, the Vanchem acquisition has positioned Bushveld to own one of the broadest vanadium product portfolios in the world. Located conveniently with access to rail infrastructure passing close to the Vametco operations on the Western Limb and the Mokopane deposit on the Northern Limb of the Bushveld Complex, the Vanchem plant fits seamlessly with the Bushveld’s assets and provides the Company with a flexible and scalable vanadium production platform. Already producing at a rate of approximately 1,000mtV per annum, which is set to grow to more than 4,200mtV per annum following a refurbishment programme, Vanchem will play a key role alongside Vametco and Mokopane in establishing Bushveld Minerals as one of the most significant low cost primary vanadium producers globally.

“With the completion of the acquisition of two of the three primary vanadium producing operations in South Africa and of the four operating primary vanadium processing plants in the world, the Company is now focused on realising the low cost and scalable production potential of these assets as it grows its production base to more than 8,400 mtV per annum. A successful operations transformation programme aimed at unlocking operational efficiencies at Vametco saw the operation achieve record production from magnetite ore, a record we hope to improve on in the 2020 year.

“I am also pleased to report on significant progress in implementing our vertical integration strategy, where our energy storage focused subsidiary, Bushveld Energy, achieved key milestones across all the three key pillars: electrolyte production, supporting Vanadium Redox Flow Batteries (“VRFB”) manufacturing and VRFB energy deployments. These milestones include: approvals by the Industrial Development Corporation (“IDC”) and Bushveld Minerals for the investment into the electrolyte manufacturing plant in East London, progress towards in respect of the solar PV plus VRFB mini-grid at Vametco and successful investments into VRFB manufacturing which has been vindicated with stellar performance of its US$5 million investment into the Avalon – RedT merger (now AIM-listed Invinity Energy Systems).

“With so much already having happened in 2020, much of what we achieved last year may feel like the distant past. However, it is important to reflect on the strong base we were able to form in that time, one which allowed us to enter this unprecedented period of a once-in-a generation global Covid-19 pandemic not only to survive the storm but still be well positioned to take advantage of the opportunities that await on the other side of this crisis. Vanadium, remains well positioned in a post-Covid-19 world that will still see a rise infrastructure spending, hence increased consumption of vanadium l and will likely continue on a decarbonisation energy transition path that will see energy storage (and with it VRFBs) grow in prominence. Bushveld Minerals’ growth strategy will benefit South Africa by ensuring the country’s natural strengths help it to become a global leader in our industry.

“Notwithstanding the short-term capital deferments in the interests of cash preservation that have been necessitated by the COVID-19 pandemic, the Company remains committed to its five-year growth strategy that will ultimately lead to a platform producing in excess of 8,400 mtVp.a. and see Bushveld Energy become a leading energy storage player.

“While internally generated cash flow would always be the priority source of funding for this growth programme, the Company will, over the five-year period, investigate a variety of forms of funding, and prioritise spend depending on market conditions, ensuring an optimal capital structure and the best returns for shareholders in the long-term.”

As we reported in May 2020 the Company rapidly developed and implemented a detailed programme in response to the Covid-19 pandemic. The programme prioritises the protection of its employees and host communities through rapid implementation of health and hygiene controls in the workplace, protocols for dealing with suspected cases of infection and business continuity measures to minimise the effects of disruption caused by the pandemic on the business. Our protocols have functioned effectively, and we will continue to monitor the situation and update our measures in line with the guidelines from the South African health authorities and Government. 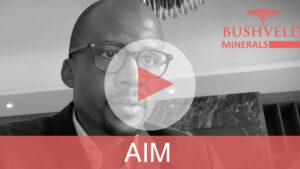